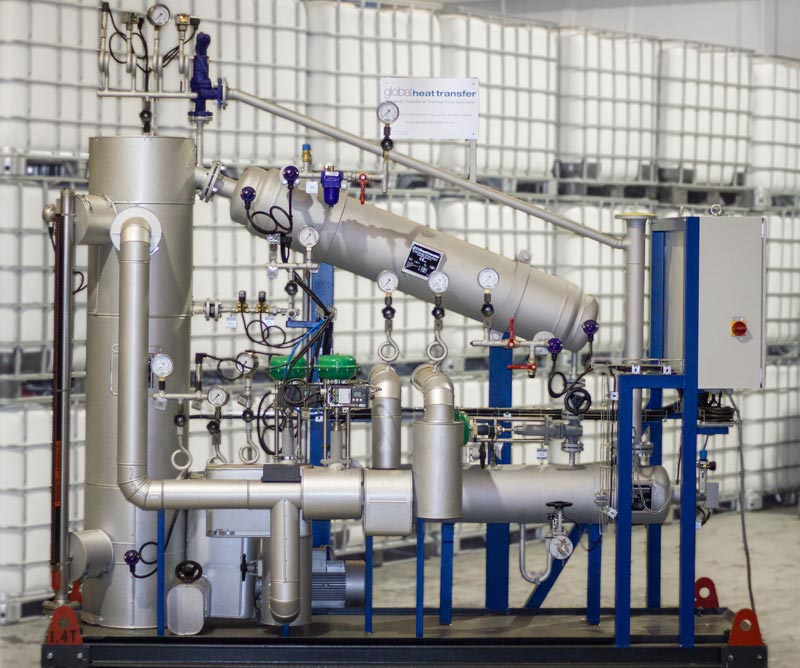 It is critical that the heat transfer fluids (HTFs) used in the manufacturing sector are used appropriately and managed safely. Food-grade HTFs are highly refined petroleum mineral oils that are non-toxic, non-irritating and lack an odor. If a food grade HTF has been certified for use in food processing, it carries a HT-1 certificate (e.g., Globaltherm FG). Food-grade HTFs are commonly referred to as being non-fouling, which means that as they thermally degrade, they produce small carbon particles that are suspended in the HTF. This means the carbon formations are less sticky, thereby reducing the extent of adhesion to the internal surfaces of a HTF system. A recent report analyzed the test reports from HTF systems and showed carbon residue was lower for food-grade HTFs than mineral-based HTFs.1 This demonstrates the non-fouling nature of food-grade HTFs. The report recommended the independent assessment of HTFs to ensure food manufacturers and producers are using food-grade HTFs.

The HTF sector was estimated to be worth $2.8 billion in 2015 and is projected to grow by 6.8% over the next 5 years.2 Heat transfer refers to the transfer of thermal energy, and fluids are used to transfer heat energy from a heat source to processing equipment where heat is needed. This is a basic requirement in a wide variety of industrial processes, including the processing of foodstuffs such as crackers or any foods that come in a packet.

Food-grade HTFs are non-toxic, odorless and appear transparent like water, but they clearly should not be confused with water.1 Indeed, a food-grade HTF is a highly refined petroleum mineral oil and consists of a complex combination of hydrocarbons obtained from the intensive treatment of a petroleum fraction with sulphuric acid and oleum, by hydrogenation or by a combination of hydrogenation and acid treatment.

Food-grade HTFs are the most likely HTF to be used in the processing of foods provided they are judged to be safe for incidental contact with food. This certification is governed by two well-known bodies—the NSF and InS. In the case of the NSF, the components comprising a fluid are assessed for safety by a toxicologist and, if deemed safe, are awarded a HT-1 certification and can be used for incidental contact. In some cases the use of so-called food-grade HTFs is stipulated by insurers and food retailers, and certain manufacturers will be routinely audited to ensure that an appropriate HTF is being used in the processing of food. Another advantage of a HT-1 certification is that it is associated with fewer handling complaints than other fluids.

In the case of the United Kingdom, Global Heat Transfer, part of the Global Group of Companies, estimates that around 20% of all HTF systems are involved in the processing of food. The use of a food-grade HTF is recommended, but its use is not regulated. However, HTF leaks do occasionally occur. In 1998 more than 490,000 pounds of smoked boneless hams were recalled by Smithfield Foods after several customers reported a “bad taste” and “burning in their throat”, which lasted up to three hours.3 The cause was incidental contact with a non-food grade gear lubricant.

In the context of food processing, good manufacturing practice (GMP) prerequisites combined with the application of risk-based Hazard Analysis Critical Control Points (HACCP) according to Codex Alimentarius principles alongside first-, second- and third-party quality audits in the supply chain are used to ensure food is managed safely both during processing and when being distributed to the consumer. In addition, industrial insurers work closely with manufacturers to ensure commercial operations are adequately insured and as part of this process, may stipulate the use of a food-grade HTF and how it should be maintained.

There is no specific legislation to ensure that food grade HTFs are used in the processing of food, so it is the responsibility of the food business owner to ensure food safety throughout the supply chain and more pointedly to design plant, equipment and premises such as to protect against the accumulation of dirt, contact with toxic materials and the shedding of particles into food.

However, as outlined in the Smithfield Foods case, there is the potential for the food to come into contact with an HTF during processing. It is important to consider a few scenarios where a food may be contaminated with an HTF.

Scenario 1. The HTF may be managed by the manufacturer according to HACCP if directly involved in the processing of a product or by GMP prerequisites if the HTF forms part of the facility and services to the production line. Either system will not allow any amount of HTF to be present in food. In the event of incidental contact with food, the manufacturer may choose to dispose of all food. In this scenario, a mineral-based HTF may be used rather than a food-grade HTF.

Scenario 2. The HTF is managed according to the stipulations from the retailer. In this scenario the retailer may stipulate that a food-grade HTF is used. The HTF would be checked during auditing. However, this would be a paper-based audit, and so the HTF would never be physically sampled and analyzed.

Scenario 3. The insurer stipulates the use if a food-grade HTF. Like scenario 2, adoption would be assessed during audits of a facility and paper-based checks would be conducted. Like scenario 2, however, the HTF would never be physically sampled and analyzed. In this case the insurer may be more concerned with the safety of the system and may be more interested in the sampling reports and parameters, such as annual sampling frequency and flash point temperature of the HTF.

The gap highlighted in scenarios 2 and 3 is that a food-grade HTF would never actually be physically analyzed onsite. HTF sampling and chemical analysis is quick and easy to conduct, and can be conducted by professional companies without interrupting production.

This article makes the case for checking that non-fouling, NSF or InS certified food-grade heat transfer fluids are being used in food production. This can be achieved using independent sampling that can be conducted on-site as requested and shared with all stakeholders including the insurer, to show the HTF is being managed and that the HTF system is safe; the retailer, to demonstrate that an appropriate food-grade HTF is being used during the processing of food; and external auditors, to demonstrate that production is consumer safe.