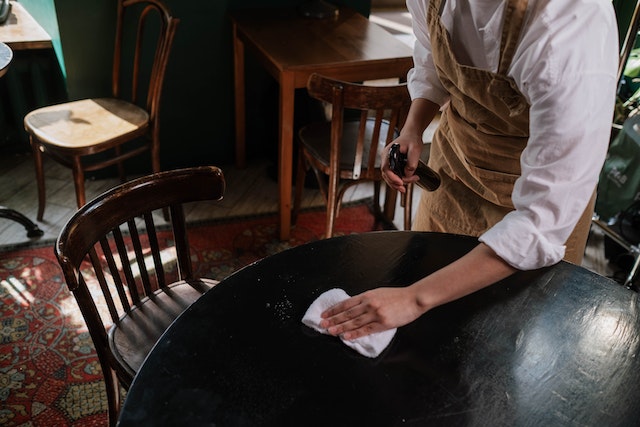 A comparative study of four commercially available sanitizers found that an ethanol-based product was significantly more effective in destroying human norovirus (hNoV), and all products tested benefited from a wiping step to physically as well as chemically remove traces of the virus.

The purpose of the study, which was published in Food Microbiology (August 25, 2022), was to assess the anti-hNoV efficacy of various surface sanitizers when applied to a laminate material commonly used for restaurant tabletops.

“We had two major research questions. First, what is the efficacy of sanitizers commonly used by the retail food industry against human norovirus? Second, what is the relative importance of including a wiping step during the sanitizing process?” said Lee-Ann Jaykus, Ph.D., William Neal Reynolds Distinguished Professor of Food Microbiology at North Carolina State University and co-author of the study. “We found that on Formica, only one of the four products tested was able to provide any significant activity against human norovirus; the other three products inactivated only a negligible amount of virus.”

Following a 30-second contact time with the EtOH-based product, log10 reductions of 3.6 ± 0.7, 4.1 ± 0.5 and 3.4 ± 0.2 were observed for GII.4, GI.6 and TuV, respectively. Treatment with all other products resulted in statistically significantly lower reductions in viral titer.

The addition of the wiping step provided greater log10 reductions in virus concentration for all products tested against all viruses.

“The addition of a wiping step to the sanitation process provided removal of 95% to 99.9% of the virus on the surface,” said Dr. Jaykus.

“One of the most interesting findings was that the quaternary ammonium-based compound (QAC) did not show any real anti-noroviral activity against the virus strains tested. This is important because the vast majority of the restaurant and retail sector in the U.S. routinely uses QAC-based products to sanitize tables in dining areas,” said Dr. Jaykus. “Further, we were able to recover infectious virus from paper towels used to wipe contaminated surfaces, which suggests that if the sanitizer does not kill the virus, towels used in wiping could spread viruses if reused on another surface.”