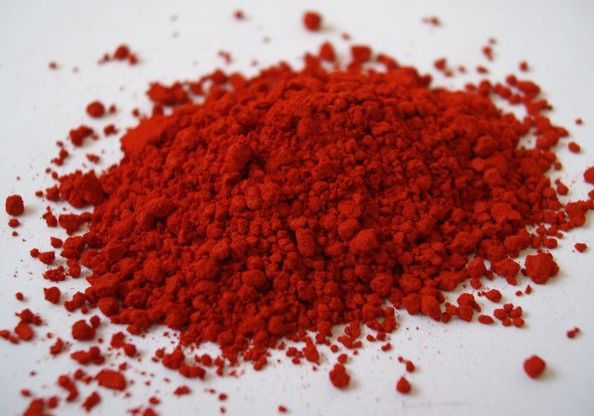 Spice Usage: ½ gram per serving or 600 grams per month?

In May 2013 a 25-gram canister of turmeric powder was sent to the lab for color and heavy metal analysis, sampled from a retail market in Brooklyn. Sudan 1 was determined in the sample. At this time, the LC/MS/MS determination was qualitative. The sample was violated for containing unallowed dye, resulting in a Class II recall (This sample was found to contain approximately 700 ppb Sudan 1 in a January 2017 re-analysis).

In December 2013, a 250-g. canister of ground red pepper, labeled as “Red Chili Ground (Special)” was sent to the lab for color analysis from a retail market in Brooklyn, New York. It was apparent from the LC/MS/MS data that this sample had high amounts of unallowed dyes Sudan 1 and Sudan 4. At that time, the NYS Food Lab had only a qualitative method, so subsamples were sent to two labs, both of which could perform a quantitative analysis of the spice. One lab reported greater than 300 ppm Sudan 1 and  greater than 300 ppm Sudan 4. The second lab results were similar. The violation of this “Red Chili Ground (Special)” resulted in a Class II recall.

In March 2014, a “sampling blitz for color” was conducted in the Albany, New York area. Twenty-three samples were taken at 12 markets. One sample of paprika was selected because the clear plastic bag package was stained red. LC/MS/MS data on this sample of paprika indicated high amounts of unallowed dyes Sudan 1 and Sudan 4, as well as unallowed acid dyes Orange II and Acid Black 1. Again, a subsample of the paprika was sent to two labs for confirmation. Again, results from both labs were similar, 720 ppm Sudan 1 and 910 ppm Sudan 4. The violation of this paprika resulted in a Class II recall. Also taken as a sample on this “sampling blitz” was a turmeric powder. Sudan 1 was found in this turmeric powder, and it also was violated for containing unallowed dye (This sample was found to contain approximately 200 ppb Sudan 1 in a January 2017 re-analysis).

In November 2014, a turmeric sample from a Brooklyn retail market was sent to the NYS Food Lab for analysis. By this time, the lab had completed a validated method for quantitative determination of Sudan 1 in spices. The turmeric was found to contain unallowed dye Sudan 1 at 1015 ppm and also unallowed acid dyes Metanil Yellow and Orange II. The violation of this turmeric resulted in a Class II Recall. Additional sampling of this brand turmeric resulted in two additional violations. Sampled in December 2014, the first was found to contain 641 ppm Sudan 1, Orange II, and Metanil Yellow. Obtained in February 2015, the second sample was found to contain 144 ppm Sudan 1. Both were Class II recalls.

Repeated and routine sampling of spices for color analyses indicated a trend: Spice samples from ethnic markets that lacked a container code were more likely to be violative.

In February 2016, a 7-oz. bag of red pepper powder (without a container code) was sent to the lab from a Brooklyn retail market. This sample of “Red Chili Powder” was found to contain unallowed dyes Sudan 1 at 599 ppm and Sudan 4 at 96 ppm. Additional sampling of Chili powder was done at the market of the same brand but different size containers. This resulted in a 14 oz. container of “Red Chili Powder” found to contain 329 ppm Sudan 1, 55 ppm Sudan 4 and unallowed acid dye Metanil Yellow. The violation of these products resulted in Class II recalls.

In March 2016, a 6-oz. canister of paprika (without a container code) was taken at a retail market in Schenectady, New York. The inspector thought the sample looked “too red”. This sample of paprika was found to contain unallowed dyes Sudan 1 at 850 ppm and Sudan 4 at 2400 ppm. Sampling and analyses of the same brand paprika but different size containers, and same brand spices from the same market resulted in no additional violations for unallowed dye. This sample of paprika contains a concentration of unallowed dye Sudan 4 as high as Europe’s worst sample as reported in the RASFF. The violation of this paprika sample resulted in a Class II recall.

In July 2016, an 80-g. bag of “Red Chili” powder was sampled at from a retail market in Ridgewood, New York. This product was found to contain 1.73 ppm Sudan 1. It was violated as adulterated, a Class II recall for unallowed dye.

In January 2017, a 7-oz. bag of “Red Chili Powder” was sampled at a retail market in Selden, New York. This was the same product and brand found to contain Sudan 1 and Sudan 4 in February 2016. The current “Red Chili Powder” was found to contain 213.1 ppm Sudan 1 and no Sudan 4. Sample was violated for containing unallowed dye and a Class II recall resulted.

Sampling and analysis continue to present.

A roadmap to dealing with this problem is already in place; all that is required is the resources to do the work. New York is trying to do its part. Maybe it is time for others to follow suit.