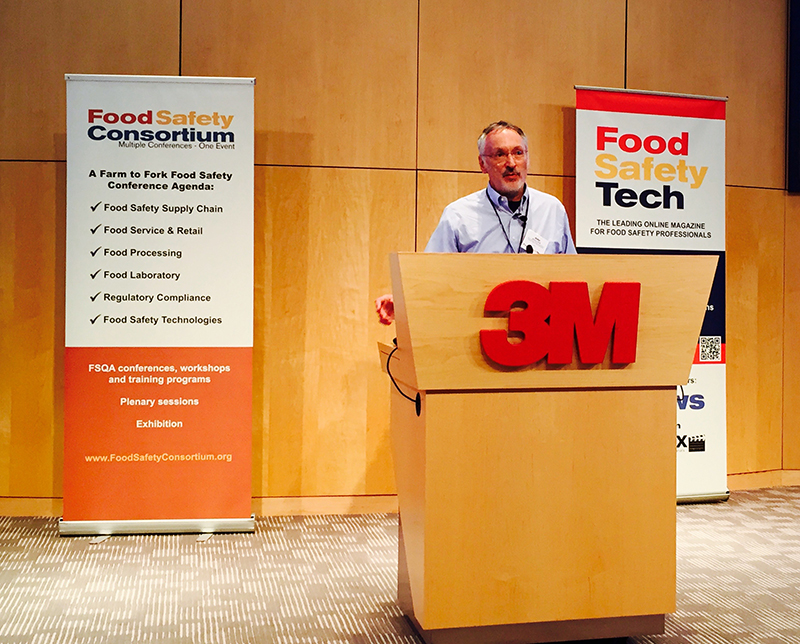 Americans consume 350 billion pounds of food each year, with one out of six people falling victim to foodborne illness, and 3000 dying. The significant amount of Listeria outbreaks hitting the industry (most recently, the staggering number occurring in produce) has left many food safety and quality assurance professionals searching for better methods of prevention and detection. Using big data, specifically metagenomics, to improve food safety and detect potentially deadly outbreaks is indeed where the future is headed.

DID YOU KNOW? The estimated U.S. cost of one case of Listeriosis is $1.4 million. Listeria is a prime concern due to the high percentage of fatalities that occur as a result of contracting Listeriosis. And what’s worse is the fact that many of the cases are preventable.

During Food Safety Tech’s Listeria Detection & Control Workshop this week, John Besser, Ph.D., deputy chief of CDC’s Enteric Diseases Laboratory Branch, outlined how the agency is leveraging metagenomics to find unrecognized problems in the food supply. Perhaps the most important element of disease surveillance is that it enables the detection of new issues, especially those whose presence was previously unknown.

Pathogen-specific surveillance allows the detection of more outbreaks, which will in turn make the food supply safer, because it will enable industry to understand the root causes of outbreaks and help them address problems much sooner. The CDC is focused on genome-based outbreak detection because of its ability to achieve faster detection—and with greater precision in identifying the source. The method has also helped the agency solve outbreaks with fewer cases occurring, and it concurrently helps rule out sources.

PulseNet, a nationwide database (comprised of 87 labs in the United States) that links cases most likely to share a cause for illness, has prompted food safety improvements across a variety of products, including sprouts, peanut products, leafy greens, flour, melons, eggs and poultry. Combine this capability with the Listeria initiative, which was launched in the mid-2000s, and the CDC has been able to find more (and smaller) outbreaks than ever before. In fact, there’s been a dramatic increase in the number of outbreak cases that have been solved (with the food source being identified). During the pre-whole genome sequencing (WGS) stage (September 2012­–August 2013), only one outbreak was solved; in year one of the WGS project (September 2013–August 2014), four cases were solved; in year 2 of the WGS project (September 2014–August 2015), nine outbreaks were solved. In these respective time periods, the median number of cases per cluster dropped from six to four to three. In addition, the number of cases linked to a food source jumped from 6 to 16 to 93 during this respective time period.

Besser also discussed the role of metagenomics, or the study of total genetic material recovered directly from environmental samples. A couple of years ago, this was science fiction and wasn’t possible, he said. But as we look to the future, metagenomics will become a lot cheaper as computers become more powerful—and at break-neck speed. He referenced IBM Research, who earlier this year announced a project being conducted in conjunction with Mars, Inc. and Biorad for sequencing the food supply chain (calling it the “largest-ever metagenomics study”).

Read Food Safety Tech’s interview with IBM Research about the next-generation sequencing project, “Preventing Outbreaks a Matter of How, Not When”

Metagenomics enables the profiling of communities of microbiomes anywhere in the food supply chain. And the method is fast—it can potentially shave weeks off the process of identifying clusters of interest. In addition, it can increase the value of interviews conducted with patients who have fallen ill (Think about it: Do you remember what you ate two weeks ago? What about a month ago?).

Currently there are several limiting factors surrounding metagenomics: Cost; sequencing read length and error rate; specific software (and pipelines); computing processing power and bandwidth; and the signal-to-noise factor. However, with the rapid rate in which technology has been improving in this space, the high likelihood of these issues being addressed and resolved in the not-so-distant future will present exciting opportunities in outbreak prevention and detection.

Consumer concerns for healthier lifestyles and for the environment have become major driving forces for forming food-buying intentions. This webinar will present results of research on consumer behavior and trust when buying well established and novice food & beverage product brands, as well as the impact of information on labels regarding products nutritional and health benefits, environmental impact of production and social responsibility of producers on consumer choices.

Prevention of foreign object contamination is a growing priority for food processors. Multi-hurdle approaches are becoming a more common method to foreign materials detection in processing plants. During this webinar, we’ll look at what a multi-hurdle approach can look like in different environments, along with the emerging set of technologies for automated inspection: Vision systems.

Quality and Safety Organizations have completely altered their practices throughout the COVID pandemic. As new auditing methods have emerged, RizePoint has helped brands manage food safety in all areas of the food supply chain: Manufacturers, distributors, packagers, service providers and retailers. During this webinar, experts will share unique remote auditing options that are helping other brands protect the safety and quality of food now and into the future.

Food safety experts will discuss challenges and tangible best practices in Salmonella detection, mitigation and control, along with critical issues that the food industry faces with regards to the pathogen. This includes the journey and progress of petition to USDA on reforming and modernizing poultry inspections to reduce the incidence of Salmonella and Campylobacter; Salmonella detection, mitigation and control; and a case study on the pathogen involving crisis management.