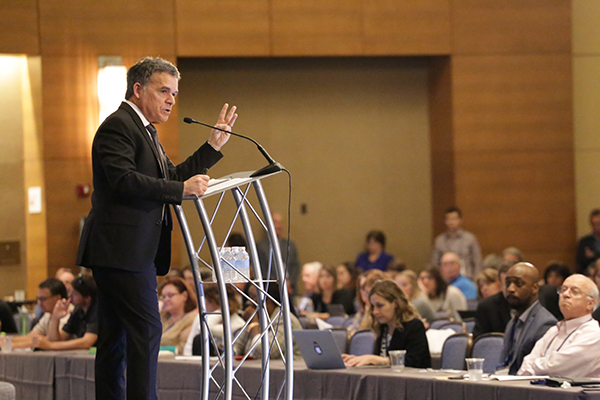 The industry has evolved quite a bit since FSMA was passed eight years ago, and there’s been an overarching recognition that more modern methods to addressing food safety challenges—especially traceability—are essential. “The agency is at the threshold of a sea change in how we’re going to oversee food safety in the nation’s food supply,” said Frank Yiannas, deputy commissioner for food policy & response at FDA at the 2019 Food Safety Consortium. The first driver is the FDA’s new initiative announced earlier this year, coined the “New Era of Smarter Food Safety”. The agency will be looking at how new and emerging technologies can help advance food safety.

“I believe that we’re in the midst of a food revolution,” said Yiannas, pointing to the level of investment in food globally. “Products will be reformulated… new food sources and production approaches will be realized, and the food system will become increasingly digitized.” It will be the job of food safety professionals to adapt to this changing landscape and to ensure that innovation does in fact happen (and safely) in order to feed the growing population.

FDA is taking a new mindset that builds on the success of FSMA but also leverages a people-led, technology enabled method to get there. Just a few days ago the agency launched FDA-TRACK, a new food safety dashboard through which FDA intends to track and measure the performance of the seven FSMA rules—and these measurements will be publicized and available for all stakeholders. Initial available metrics will be tracking outcomes for the FSMA Preventive Controls and the Foreign Supplier Verification Program related to inspections and recalls.

The second driver of this sea change at the FDA involves a shift in its current approach to FSMA and the evolution of the regulation. While the agency continues to educate while it regulates, this past summer FDA took actions that are indicating a shift in its approach to FSMA compliance. On July 30, FDA issued its first warning letter using FSVP authorities to a tahini importer for lack of FSVP compliance. This was followed a month later by actions surrounding the most recent Salmonella outbreak linked to imported papaya. “If you pause and look back, there have been eight outbreaks in eight years,” said Yiannas. The outbreak involved 500 documented cases, 100 hospitalizations and two deaths. “I thought, enough is enough,” he added, and this prompted Acting FDA Commissioner Ned Sharpless, M.D. and Yiannas to issue a statement asking the papaya industry to do more—and urged them to work together to review their practices and make necessary changes to ensure that the papayas they’re offering to the public are safe. The FDA also issued a warning letter to the papaya importer, with the possibility of barring the company for the next five years. “When there’s a public health hazard, FDA will act decisively,” said Yiannas, stating that parity and oversight is important, and domestic and imported food must be safe. “We regulators, we’re going to strike the right balance, and are committed and as passionate as ever in trying to bend the foodborne illness curve.”

Yiannas added that over the next eight years, the trajectory of papaya-related illness will look very different from the last eight years, thanks to the adoption of better technologies—and that’s part of what the FDA’s New Era of Smarter Food Safety is about. “The food system today, while it’s still impressive, it still has one Achilles heel—lack of traceability and transparency,” said Yiannas. There’s a lack of knowledge in where food comes from, where it’s produced, and the fact that many companies simply don’t know as much about their supply chains as they think. With FSMA, Congress anticipated the need to track and trace food, and now the agency is exploring how new technology can enhance tracking and tracing. With regards to tracking foodborne illnesses, the food industry has been in a race between detection and prevention. “We’re getting so good at finding the needle in the haystack, but we can’t find the haystack,” said Yiannas. “We have to provide the same level of investment for technologies for trace backs….we will do that together.”

When looking at implementing smarter tools and approaches for prevention, the industry needs to work together at not just collecting the data but also converting this data into actionable information. Yiannas emphasized that the agency is not chasing the shiny object—new technology will not be a distraction; it will help solve industry problems and address the new issues that arise with the evolving food system (i.e., cell-cultured meat, plant-based meat, etc.). The agency is also holding a public meeting on October 21 to encourage discussion between the public and private sector, all surrounding this new initiative on smarter food safety.

“What’s become clear to me is [that] there’s so much we an do working together—the public and private sector… Think. Think about how you can do your work differently,” said Yiannas. “We’re all working for the same boss, the consumer. [We have the] same mission and they’re counting on us.”