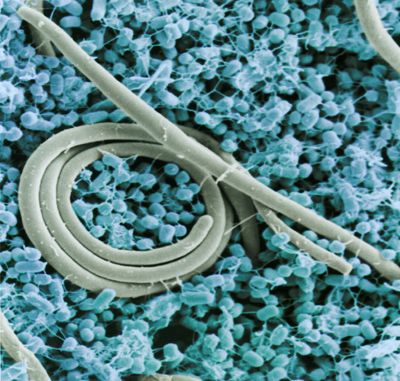 Food safety poses a global health problem. According to the World Health Organization, contaminated food can cause more than 200 diseases – and food- and water-borne diseases that cause diarrhea are estimated to kill two million people each year worldwide.

And food safety is not just someone else’s problem.

“Foodborne illnesses are a significant problem in the United States, with massive impacts on public health and the economy,” says Ben Chapman, a food safety expert and researcher at NC State. And the numbers back Chapman up.

According to a 2012 report from researchers at the Emerging Pathogens Institute, Resources For the Future, and the U.S. Department of Agriculture’s Economic Research Service, foodborne illness is estimated to cost the U.S. more than $14 billion annually. (The estimate takes into account factors such as medical costs and productivity losses.)

And a 2011 report from the U.S. Centers for Disease Control and Prevention (CDC) reported an estimated 9.4 million episodes of foodborne illness each year in the U.S. from known pathogens. An additional 38.4 million cases are estimated to come from unspecified or unknown pathogens. In total, foodborne illnesses are thought to contribute to 48 million illnesses annually – resulting in more than 128,000 hospitalizations and 3,000 deaths. It is, in short, a big deal.

So what are these foodborne illnesses? And how much damage does each of them cause? In advance of World Health Day, we wanted to explain a handful of the relevant pathogens implicated in foodborne illness.

Campylobacter is a genus of bacteria, many of which can cause an illness called campylobacteriosis in humans, with symptoms including diarrhea and abdominal pain. People can contract campylobacteriosis from undercooked chicken, from cross-contamination via raw chicken, or from drinking unpasteurized milk.

According to the 2012 paper, campylobacteriosis affects 845,000 people annually in the U.S., costing the nation an estimated $1.747 billion every year and leading to 8,463 hospitalizations.

This is a bacterium that causes listeriosis, which is characterized by fever, muscle aches, and sometimes by gastrointestinal problems, such as diarrhea. Listeriosis can be contracted from an incredibly broad range of foods.

According to the 2012 study, listeriosis costs the U.S. $2.577 billion annually, despite the fact that there are only 1,591 illnesses per year. But 1,455 of those illnesses require hospitalization – and 255 result in death.

Noroviruses are the most common cause of foodborne illness in the U.S., affecting an estimated 19-21 million people each year. Symptoms range from vomiting and diarrhea to fever and headache. Transmission comes from ingesting infected feces or vomit particles – for example, by touching a contaminated surface and then touching food or touching your mouth.

According to the 2012 study, noroviruses cost the U.S. $2 billion per year, with more than 14,000 hospitalizations and approximately 150 deaths annually. NC State is a leader in norovirus research, and home to NoroCORE – the Norovirus Collaborative for Outreach, Research, and Education. NoroCORE pulls together norovirus research from 18 institutions, with funding from the U.S. Department of Agriculture.

This is one species of the pathogen that has myriad of subspecies and types – more than 1,400 of which are known to cause human illness. Infection with Salmonella species causes salmonellosis, with symptoms including diarrhea, fever, and cramping. Salmonellosis can be contracted from a variety of sources, ranging from poultry to peanut butter to mangoes.

According to the 2012 study, the subspecies within S. enterica alone costs the U.S. $3.3 billion each year, causing more than one million hospitalizations and almost 400 deaths annually.

What are researchers doing about this?

The four pathogens listed above are just a few of the rogue’s gallery of bacteria and viruses that can cause foodborne illness. But researchers are constantly learning more about these health risks.

“New technology and new research on pathogens, practices and prevention are improving our ability to identify and address foodborne illness,” Chapman says. “The field is really opening up. It’s an exciting time to be involved in food safety research.”

Between now and April 7, we’re planning to publish a series of posts on various aspects of food safety – what we know, what we don’t know, and what we’re working on. We also hope to offer insights to help folks lower the risk of contracting foodborne illnesses. We hope you’ll learn something new.

Note: This article originally appeared on NC State News, and has been published here with permission. You can find all of NCSU’s posts related to food safety here.