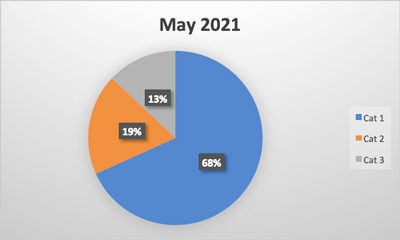 The first half of 2021 saw almost a 20% increase in recalls vs. the last 6 months of 2020 (117 vs. 96). According to a recent report by Lathrop GPM, LLC, food producers have seen an increase in food safety incidents since the pandemic began, and expect an ongoing increase over the next year.1 A majority of recalls were due to undeclared allergens or potential for allergen cross contamination. Second to allergens were potential for microbiological contaminants, including Salmonella, Listeria, E. coli, and Cyclospora.

The FSIS provides ongoing surveillance of Salmonella and Campylobacter presence in poultry, both domestic and imported. Salmonella is reported by facility and each is given a category rating of 1–3. One is exceeding the standard (based on a 52-week moving average), two is meeting the standard, and three is below standard. For the 52-week reporting period ending May 30, 2021, 60% achieved category one, compared to 56% the previous 52 weeks.

Listeria and Salmonella Surveillance in RTE Meat and Poultry

USDA FSIS conducts periodic sampling of Ready to Eat (RTE) meat and poultry products and reports quarterly results. Sampling is conducted both in a random fashion as well as based on risk-based sampling. In Q2 2021, 4769 samples were tested for Listeria, compared to 4632 in Q1.

Percent positive rates were .36% for Q2 and .43% for Q1. Neither quarter reported any positives for Listeria in imported RTE Meat and Poultry Products.

Salmonella samples for RTE totaled 3676 in Q2 2021, compared with 3566 in Q1. In both quarters, only 1 positive was found in the samples collected.

The FSIS also conducts ongoing routine sampling of beef products for E. coli. E. coli is further classified into 0157:H7 and non-0157:H7 Shiga toxin-producing E. coli (STEC). In Q2 of 2021, 4467 samples were collected and tested for 0157:H7 versus 4268 in Q1. Of these, three were positive, compared to seven positives the preceding quarter. For STEC, a total of 8 positives were found, compared to 1 positive in Q1. No positives were found in imported goods in Q2, although in Q1 2021, 4 positives for STEC were found.

The first half of 2021 showed an increase in activity, which is on par with food industry survey data. Food recalls have increased, with food allergens remaining the most prevalent reason for recall or withdrawal. While inspections also increased, they have not returned to pre-pandemic levels. The impact of the spread of the Delta variant and increased restrictions is yet to be seen, but inspection activity will likely not rebound entirely by the end of the year. Pathogen tests by FSIS increased quarter over quarter for Salmonella, E. coli, and STEC, with mixed results in prevalence.